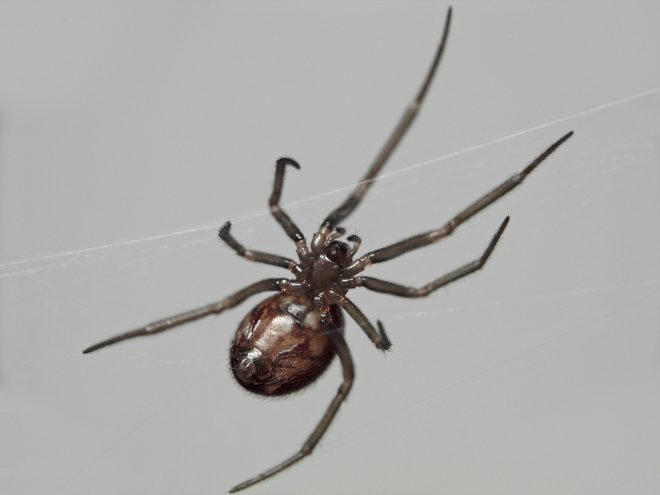 It was still dark out when I got up this morning.

Knowing — hoping — I would be in for a long-ish writing stretch, I decided to unload and reload. Meaning, I needed to go to the restroom, and then get some coffee. Nothing gross here, just some practical writing considerations that they normally don’t describe in any detail whatsoever in writing books. I am sure there are a billion reasons for that: however, being a mother of four, I’m into practical honesty.

I walked straight from the bathroom to the kitchen, and planned to walk straight from the kitchen to my Jesus chair in the corner of the living room. It was on that return trip that I came face to face with God’s complete and ultimate grace. It was dangling right in front of my eyes.

Literally. Dangling right there — all eight of its legs, all of its HUGE and smooth and bloated abdomen, all of its I-don’t-want-to-know-how-many-eyes — suspended on a fine silken thread that extended from the ceiling to my eye level. Of course, at this point, I couldn’t take my eyes off the alluring arachnid. Because if I did, it would surely do one of three things: 1. It would ascend, 2. It would descend, 3. It would somehow morph into a gargantuan tarantula and I would be forced to turn into Super Spider Slicer Momma and save my entire household without their knowing because it’s my writing time, which means 5 a.m., and everyone else who was not a writer, and therefore sane, was still asleep.

The things I do for love.

So, the entire following movements are completed while my eyes are glued straight on the dangling spider. I walked across the floor, placed my coffee cup on the hand-crocheted coaster on the table next to my Jesus chair, all while assessing potential weapons.

No, I don’t know how I didn’t spill a drop, but if anyone needs a contestant for one of those games where the wait staff has to run an obstacle course with a tray full of drinks, count me in.

I then re-traced my steps into the kitchen, made like the stretchy Momma on The Incredibles and somehow groped for and actually obtained the flyswatter with the bug-body-dust-pan-attached-for-your-convenience. It was right on the edge of the kitchen table, placed in such a way that the swatter was balanced at an angle on the table corner, so as not to contaminate the table surface with any crusted bug guts.

This is not my normal swatter home. The normal swatter home is hanging in the mudroom. But last night my Fearless-Momma-Self responded to the “IT’S HUGE AND IT LOOKS LIKE A FLY, BUT IT HAS EVIL WINGS!” scream from my beautiful Number Three. I was too tired after hunting the dastardly flying demon, to actually hang the swatter back up in its normal home, so I simply balanced it on the table corner. But that’s another story for another day …

I walked stealthily toward the dangling spider. My foe stretched out his/her crazy long legs. I held my breath. It was now or never. I raised the swatter. I flexed tremendous muscles of faith and athleticism. I whacked the spider so hard I heard it hit the ground.

I knew I heard it hit, but whether it hit the ground was up for debate. In fact, I wasn’t so sure where it had landed.

Now, my Smart-Momma-Self would have whacked the spider in the direction of the open bathroom door. The counter in there is white. The cabinets are white. The floor is even white. I would have clearly seen what I hoped would be the spider carcass against all that whiteness.

I had only one choice left. Turn on the big light, get down on the ground, eye-level with the hardwood floor, and pray like crazy for some small hope of a shadow that didn’t move. There, just a few scant inches from my nose, was the expired arachnid, legs curled up in a dead-spiderly-fetal position. You see, I wasn’t playing a carefree game of badminton in the yard. I was fighting for my very life. I had whacked that spider so hard that, if the impact of the whack had not killed it, the impact into the hardwood floor would have. There was a small crater under the spider’s body.

I breathed a sigh and used the bug-body-dust-pan-attached-for-your-convenience to properly dispose of the deceased danger.

It was when I sat down in my spider-free Jesus chair, took a pensive gulp of coffee, and started to write, that I realized the Grace of it.

Grace is, in essence, unmerited favor. It’s having All-Knowing, All-Seeing, All-Present, Ever-Loving God be aware of every single dangling danger, and already having a plan that handles that danger for me. Even when the danger is me and my impetuous choices.

You see, God knew how to get my attention. He knew I needed a reminder.

For I know the plans I have for you,” declares the Lord, “plans to prosper you and not to harm you, plans to give you hope and a future. Jeremiah 29:11 (NIV)

Sometimes, Grace hides the spiders that are just too big for even me to whack.

Sometimes, Grace lets me see the glint of light on fine spider silk, and the small movements that put me on spiritual spider alert.

Grace lets me grope for the swatter and swing away. Grace teaches the lesson of Spider-Humbled-Momma, and sometimes, I actually learn it.

Grace always, always, sits me down in the Jesus chair, gives me another long gulp of coffee, and offers me a chance to see that God’s Grace is always, always good, even when it is hard.

And, thankfully, Grace always, always, says, “See what I have done? I’ll help you remember. Now, get over yourself and your fear, and take the next right step. Go ahead, and write. I’ve already got all these tangled webs.”

One thought on “From A Slender Thread of Grace”