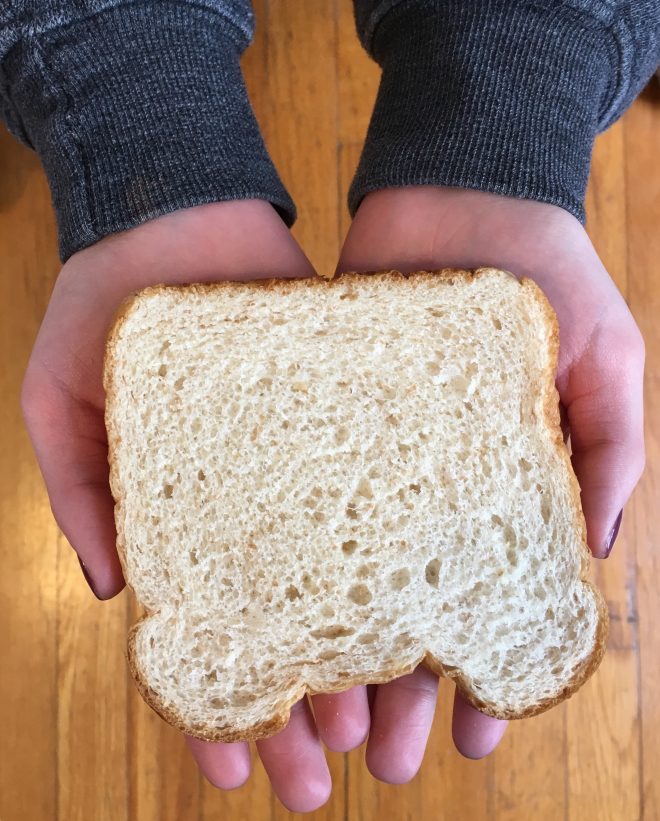 One word and all I can think of is arithmetic.

And there you have it. Simplify made simple. Nothing is ever simple.

A collection of binders with peeling, black, plastic covers and sprung rings.

A third set of golf clubs.

A lone couch cushion – with no accompanying couch.

Clothes that I promised myself I would fit back into once I got that over-43-and-just-had-a-baby weight gain taken care of.  [snort!]

Boxes and boxes of games for family game nights.

Lots and lots of things.

Nothing is ever simple. But things can be simplified.

In my head, and from the work of my own hands, it’s harder than it seems. To simplify means that I must lose something. I must give up the many for the one, or the none.

But what if I miss the things?

I can see Jesus shake His head, hold out His hand and say, “Kristy, just give me the bread.”

In those days, the multitude being very great and having nothing to eat, Jesus called His disciples to Him and said to them, “I have compassion on the multitude, because they have now continued with Me three days and have nothing to eat. And if I send them away hungry to their own houses, they will faint on the way; for some of them have come from afar.”

Then His disciples answered Him, “How can one satisfy these people with bread here in the wilderness?”

He asked them, “How many loaves do you have?”

So he commanded the multitude to sit down on the ground and he took the seven loaves and gave thanks, broke them and gave them to His disciples to set before them; and they set them before the multitude. They also had a few small fish; and having blessed them, He said to set them also before them. So they ate and were filled, and they took up seven large baskets of leftover fragments. Now those who had eaten were about four thousand.

You see, the disciples had a problem. They had been following this God-Man, listening to His teaching, scratching their heads, watching the blind see and the lame walk and the demons flee. Jesus opened up about his compassion and His desire to feed the gathered multitude, but all the disciples had were seven loaves of bread and a few small fish. There was no human way to feed that many people.

The disciples had to give up their few things, so Jesus could multiply them – a supernatural simplify.

I think of simplify and how I need it and how others might want for what I need to un-want.

I think of this writing and this life I have been given and wonder how to begin. My equations have never produced the correct sums. They must be rewritten.

I simplify when I hand over the variables – the bread – of each small space where I touch earth in this time to the ultimate mathematician.

Some of the bread I hold in my hand is moldy. Unhealthy to keep, unhealthy to give.

Some of the bread is fresh and fragrant and way too much for me to eat.

Some of the bread wasn’t really mine in the first place.

“Kristy, just give me the bread.”

I’ll take a slice of that.

5 thoughts on “Just Give Me The Bread”